So; here I am again at another newly purchased home where the previous homeowner has implemented additions that have compromised the safety and structure of the home and left the new owners with unexpected cost.

As the Washington, D.C. population continues to grow, I’m dismayed to see so many young new homeowners having to deal with these issues.  Typically, children are already living in the home – which makes the amendments even more immediately dire. 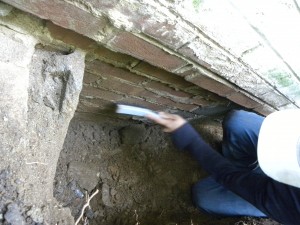 At this particular home the front entrance was moved from the middle of the house to the right front. Fine – Nice – Makes sense.

The original front entrance porch was correctly tied into the home with a concrete ledge extending from the foundation of the home itself.  The foundation of the original porch boxed in an open space between the outside of the porch and the foundation of the house so that, when the porch base was removed, it exposed brick and block that, at the time, were not exposed to the ground and did not need to be waterproofed.  The previous contractors ignored this detail and filled the open cavity with soil hence, exposing open celled concrete block and brick to soil moisture.  To make matters worse – the new stoop was not tied to anything!  It doesn’t even have a footing.  Hidden underground mistakes often don’t show up until the ground water seeks it’s way into the foundation.  It’s an easy place to initially cut cost on a project, especially if you are planning to move.

So; although I’m sure that this saved the previous homeowner a bit of cash,  the stoop is now settling which will allow even more water infiltration and eventually need to be removed and replaced correctly.

I’m not suggesting these construction errors are always intentionally done.  Rather,  just another ‘heads-up’  for the new homeowner as the inspector and agent will not pick up on this.

If this looks familiar and/or you would like to see more examples that may relate to your particular site and home go to www.storm-water-professionals.com.

Share This
Recent Posts
Archives
Categories
Categories
Question, Comments, or Inquires on how to schedule an on-site consultation?
Contact Us! 301.249.9000
© 2019 PETRO Design/Build Group, All rights reserved
Back To Top
×